What is the Wellington Regional Growth Framework?

The Wellington Regional Growth Framework is a spatial plan that describes a long term (30+ year) vision for how the region will grow, change and respond to key urban development challenges and opportunities in a way that gets the best social, economic and environmental outcomes for the region.  It sets a strategic and spatial direction for the region that will help guide and coordinate regional-scale urban planning and align investment in infrastructure and services.

Why have we developed the Framework?

The region is growing faster than it has done for many decades and is facing immediate and longer-term housing supply and affordability, urban development and infrastructure challenges that cross local and iwi boundaries. It is important that we take a region-wide approach and develop a partnership between central government, local government and mana whenua to respond to our region’s housing and urban development challenges and leverage its opportunities.

What geographic area does the draft Framework cover?

Horowhenua District has been included in the Wellington Regional Growth Framework because much of its housing and employment market now effectively functions as part of Wellington regional market for housing and jobs.

What are the benefits of a region-wide approach?

The challenges we face are regional, and many of these cross local council boundaries and are best dealt with together not individually. An enduring regional partnership between central government, local government (including Horowhenua District) and iwi will allow the partners to focus and align efforts to respond to these issues.

Who has been developing the draft Framework?

This project is a collaboration between central government, the councils of the region, including Horowhenua District and the Greater Wellington Regional Council and mana whenua.

What time period is covered by the draft Framework?

The draft Framework is a spatial plan for future growth in the region over the next 30+ years.

What process did we follow to develop the draft Framework?

Through engagement with iwi, council organisations, infrastructure providers and other stakeholders through workshops and other forums we first identified how regional growth could look in the future under different scenarios. This informed a number of urban development options which were subject to quantitative and qualitative analysis. The assessment led to an Emerging Spatial Direction for the region which has been further refined to become the Draft Framework.

For more detail on the process we followed see https://wrgf.co.nz/wp-content/uploads/2020/09/WRGF-Options-Assessment-Report-Aug-2020.pdf PDF 969KB

What opportunities did stakeholders have for input into the draft Framework?

In developing the draft Framework we’ve held many workshops with hundreds of people from across the region, including mayors and councilors, mana whenua and Maori stakeholder ropu, technical experts, interest groups, industry organisations, government organisations and other stakeholders representing diverse economic, social and environmental interests from around the region.

Where are we at with the draft Framework?

The draft Framework has been signed off by the projects Executive Review Group that is made up of the Chief Executives from each council, iwi and equivalent representatives from Waka Kotahi and the Ministry of Housing and Urban Development. It has been endorsed as a draft ready for public consultation in March 2021.

What are the next steps?

The draft Framework will be subject to public consultation and continued stakeholder engagement before it is finalised in the first half of 2021.

How can the community have a say?

Public consultation on the draft Framework will be undertaken in the first half of 2021 (starting in March) which will be followed by signoff of a Final Framework document.

How does the draft Framework affect me and why should I care?

We have a unique opportunity to plan for future growth at a region-wide level to ensure that the right investments and planning occurs in the right places, to deliver the best for the future of the region. If the Wellington-Horowhenua region is where you live, work or play and you want it to address the housing and urban development challenges it faces then this is your chance to help shape the future.

What are the objectives of the draft Framework?

The objectives sought from the Framework have been developed jointly by the project partners and reflect the particular needs for change in the region.

What are the key challenges identified in the draft Framework?

There are four key challenges we have identified and listed below.  More detail on these can be found in the Foundation Report on the Wellington Regional Growth Framework website.

What are the 'key moves' identified in the draft Framework?

There are six big things or key moves we can undertake to make a big difference in this region.  These have been identified as:

How does the draft Framework link in with other policy?

The diagram below provides an overview of how the Draft Framework and other documents fit together. 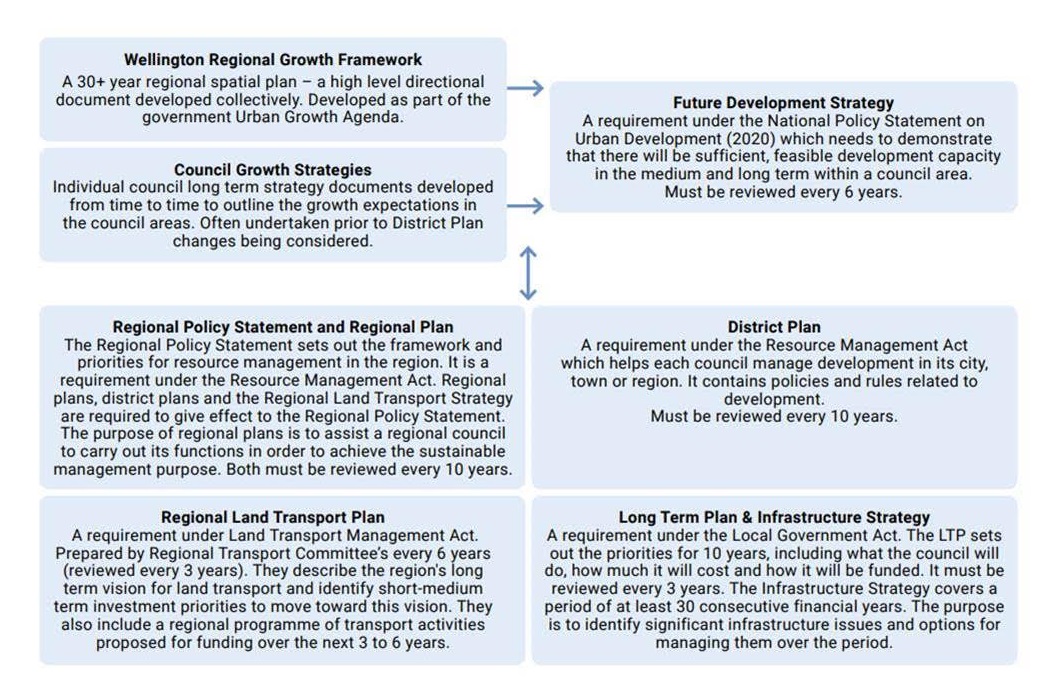 How does this fit with other work going on in the region?

The draft Framework takes into account work already underway in the region to accommodate growth. This includes work by councils such as spatial plans or district plan changes, work by central government agencies such as the Waka Kotahi’s mode shift planning and work by iwi such as the papakainga housing and property development.

What population growth scenario have we used?

The draft Framework has been developed by considering:

While there is no certainty about when, how or at what rate, the region’s population might reach this size, the draft Framework has been developed based on this scenario to give a better understanding of what would be required to accommodate this level of growth, and potential infrastructure needs.

It is important to note that this is not a policy target.

How will the draft Framework be implemented?

How frequently will the Framework be reviewed and updated?

The frequency of review will differ going forward based on circumstances.  However we do know that the region will need to update this Framework to include additional information by 2024 to comply with the need to produce a Future Development Strategy as required by the National Policy Statement on Urban Development.

How can I get a copy of the draft Framework?

How do I find out more?

If you want to delve into the Draft Wellington Regional Growth Framework in more detail or read up some more about the project and reports check out the Reports section of this website.